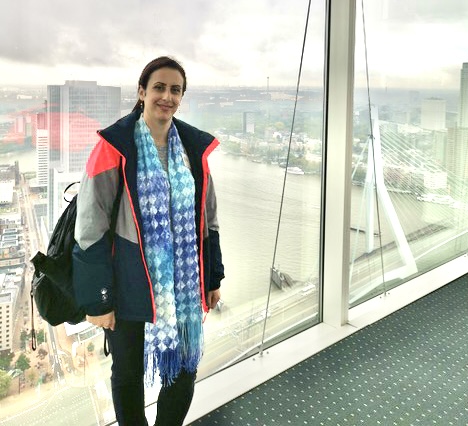 Rima builds what is lost

Rima is one of our regular volunteers. She helps with recruitment every Thursday morning at azc Joseph Haydnlaan. She lives with her family in the emergency shelter Star Lodge Hotels. Also there, she actively participates in a lot of activities from Welkom in Utrecht. What Welkom in Utrecht means to her, and what drives Rima to be so actively involved, you can read below.

Ten months ago, Syrian Rima arrived at the Star Lodge Hotels emergency shelter on Biltsestraatweg with her husband Asem and children Atheer (4) and Ritta (8). What that was like? ‘I felt alone. Confused. Angry at the whole situation. But with time I managed to adjust and got used to the circumstances.’ She learned about Plan Einstein’s offerings and is taking full advantage of them. For example, she is currently studying English, going to yoga and taking a module at Deloitte. As it goes, one thing led to another: ‘It’s all about relationships. With connections you don’t feel alone and you can benefit from them in the future.’

Rima is determined to get her Cambridge English certificate soon, which she needs to enter the master’s program Business Informatics. In Syria, she was a programming and information systems engineer. In the United Arab Emirates, she taught at a British high school. She misses her work. ‘And I miss my family, our home. It’s tough to have to start all over again.’

In the beginning, when she was just in the shelter, Rima could join a language café of Welkom in Utrecht where volunteers from the neighborhood practiced Dutch with the refugees. She no longer goes there now but she meets every Friday morning by herself with the woman she was paired with then to work on her Dutch. ‘She also sometimes brings books for me.’ She laughs. ‘Children’s books.’

She has since completed the Build Your Own Future (BYOF) course. ‘That program especially gave me a lot of contacts. I also helped translate at the related program Women in Business and that’s how I got to know De Voorkamer. There I heard again how I could get swimming lessons so I do that now. That’s what I mean: connections work.’

At BYOF, Rima was made aware of the Future Academy by New Dutch Connections. As a result, she is currently attending eight sessions at Deloitte in Rotterdam and Utrecht, including on how to work with the ‘agile methodology’ within the financial and IT sectors. ‘In addition, we get another coach who helps with finding work in these sectors.’

Vrijwilligerswerk doet de energieke Rima ook. Bij Welkom in Utrecht helpt ze met vertalen en ze informeert bewoners uit azc Joseph Haydnlaan over het grote aanbod van activiteiten dat deze stichting aanbiedt. Ze maakt er zelf ook veel gebruik van. For example, she went with her family to the beach at Scheveningen and an indoor playground. Unfortunately, she had to stop the embroidery project Let´s grow flowers, not walls because her neck hurt. And she no longer has time to dance at Het Wilde Westen. She perks up: “But my daughter Ritta recently started taking piano lessons there! She loves it, it was her big dream.’

Where does she get the strength and energy to rebuild everything after losing so much? ‘I have to, because of my children. Everything I do is for them, for their future. It wouldn’t be good for them, a depressed mother.’