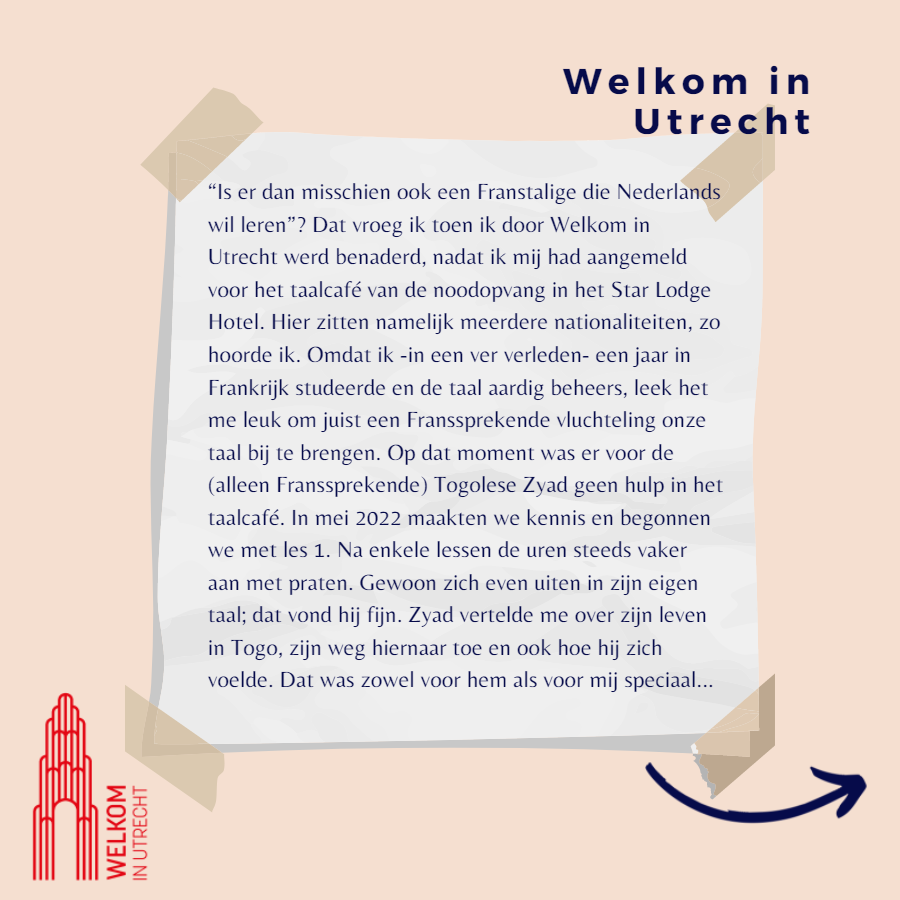 From language classes to friendship

“So is there perhaps also a French speaker who wants to learn Dutch?”

That is what I asked when I was approached by Welkom in Utrecht after I signed up for the language café at the Star Lodge. After all, I heard that there are several nationalities here. Because I -in a distant past- studied in France for a year and have a good command of the language, I thought it would be fun to teach our language to a French-speaking refugee. At that time, there was no help in the language café for the (only French-speaking) Togolese Zyad.

In May 2022 we got acquainted and started lesson 1. After a few lessons the hours passed with more and more talking. Just expressing himself in his own language; he liked that. Zyad told me about his life in Togo, his road to here and also how he felt. That was special for him as well as for me. Soon I also got to know his partner Selam and their 2-year-old son Samuel; what sweet people! I really wanted to help this family move forward.

One day Zyad told me with great sadness in his voice that they had to move that same week to a another shelter location in Gilze.
The car was packed and there we went, after an emotional goodbye in Utrecht where the family had lived for 11 months, on our way to Brabant. During the time they were there, I visited them from time to time, sometimes together with my husband, and we were in regular contact by phone. After two months I received the message that they had to leave again. This time to Winschoten in Groningen. Groningen! That’s far away. So again I was happy to be there for them and we drove several hundred kilometers from the south to the north. I enjoyed seeing where they would end up next.
They were received with a warm welcome at the small shelter. That felt good and that is where they are now living while waiting for the further asylum procedure.
Unfortunately, I can’t “stop by” now, but fortunately they have a nice time there, the people are friendly, and they can cook for themselves, which is very nice.

These dear people have become like family in a few months, for whom I am and will be happy to be there, whatever the future holds for them.

They are very grateful for my friendship and help and happy about our contact. And I, in my place am grateful for what our meeting has brought!